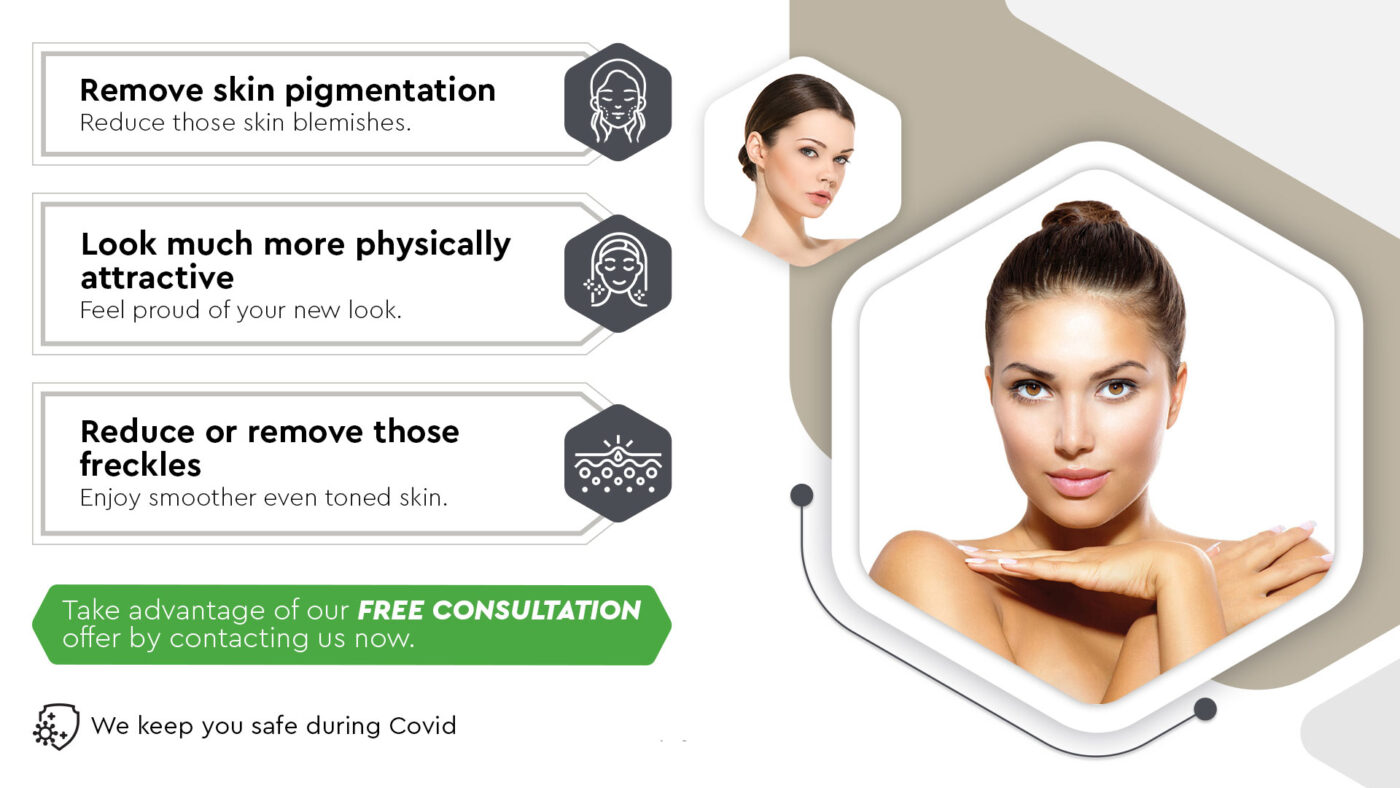 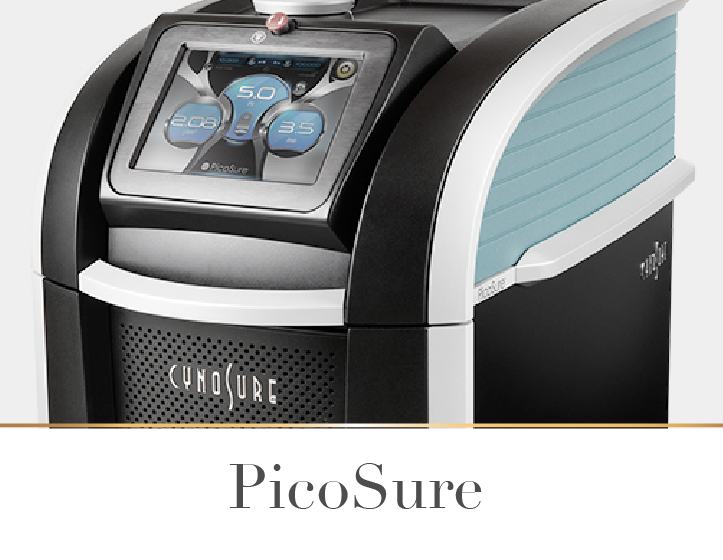 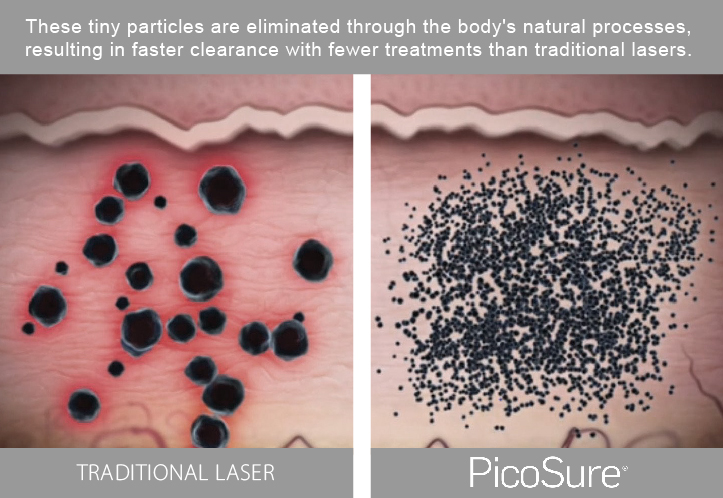 Traditional nanosecond lasers predominately rely on photothermal action, delivering heat to the pigment and surrounding tissue. PicoSure takes advantage of PressureWave Technology to shatter the target ink into tiny particles that are easily eliminated by the body. 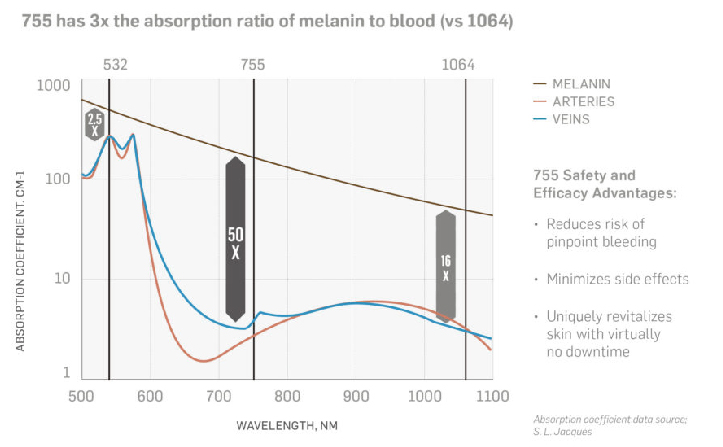 PicoSure’s PressureWave™ technology uses a unique wavelength of light (755nm) and a specialized lens to convert laser energy into gentle pressure. This pressure squeezes cells, activating the natural cell signaling processes that create new collagen and elastin without burning or damaging the skin.

PicoSure® can produce laser-induced optical breakdowns (LIOBs) by redistributing and concentrating laser light through a unique patented FOCUS Lens Array. The laser-induced optical breakdowns (LIOBs) will create a shock-wave to enhance cell proliferation and repair mechanisms, stimulate collagen and elastin hyperplasia in the dermis layer. The dAs a result, the dermis layer could be thickened from inside to outside, thereby improving skin condition, reducing the pores, smoothing fine lines, and improving scars. Most importantly, there are no wounds created after treatments but only with very short downtime.

PicoSure’s unique energy delivery is a breakthrough for patients seeking a way to improve their skin and reduce signs of aging but doesn’t want to deal with the risks, pain, and downtime of traditional laser treatments. PicoSure gently disrupts the particles responsible for a range of pigment conditions like freckles, sunspots, and other discoloration using highly targeted energy.

The laser corrects skin blemishes and imperfections without the use of dermal fillers or harsher laser treatments. The results will vary based on each patient’s unique needs and beauty goals, but the procedure has been proven effective in reducing the appearance of:

The following questions and answers section handles many queries clients have asked in the past.

How much does PicoSure treatment cost?

Picosure treatment costs vary depending on the number of sessions required and on the area of the body being treated. It also depends on pigmentation, colour intensity and the size of the tattoo. Patients spend on average between £400 to £2000.Usually, the charge for one session is £428 and the cost increases with number of sessions in following way:

Does the Pico laser Really Work?

PicoSure is a picosecond aesthetic laser, that has been proved to be effective by FDA in Europe and united states as well as the Chinese Food and Drug Administration(CFDA) for the treatment of different skin diseases. In one study, for example, nearly 90% of patients who used this laser to repair wrinkles were satisfied with the results after six months. As compared to other technology for skin treatment PicoSure uses Pressure Wave Technology to shatter the target ink into little particles that the body can easily reject.

What is a PicoSure laser?

PicoSure is a laser treatment that can efficiently and easily remove tattoos and pigmentation. This novel treatment is gaining popularity in Europe and the United States. Discolouration, Freckles, sun spots, and unsightly tattoo ink are all treated with the PicoSure laser by using high targeted energy. PicoSure smoothly break the particles which are responsible for skin pigmentation like, scars and sunspots etc

Why is PicoSure Laser Skin Rejuvenation Better for Skin?

Skin texture, such as scars and wrinkles, are improved by the laser. The laser turns laser energy into moderate pressure waves, which activate cell signaling and kick-start the body’s natural immunological response by activating cell signaling and creating new collagen.Furthermore, without the use of dermal fillers or more aggressive laser treatments, the laser can remove skin flaws and defects.

How long does it take for pico laser to work?

The treatment’s results will manifest over time as your skin’s natural regeneration abilities kick in. The majority of individuals get improvements within 2 or 3 weeks following their initial consultation. Your outcomes will improve until your last session, or until you reach your desired outcome.

How many sessions of PicoSure does it take to remove a tattoo?

This is determined by the state of the client’s tattoos. In general, the PicoSure laser is used to erase black or light tattoo inks in 2-3 sessions, and dark tattoo inks in 4-5 sessions.
The success of tattoo removal is also determined by:
• The size of the tattoo and the depth to which it was pierced into the flesh. It is easier to lighten or clear a tattoo that is located on the skin’s more superficial layers.
• The intensity of the tattoo ink. Because of the type of tattoo pigment used, multi-colored tattoos are frequently more difficult to remove than black tattoos. Some metallic tattoo inks are more difficult to erase than others.

Is Pico laser the best for tattoo removal?

The PicoSure laser has long been regarded as the gold standard in tattoo removal. This cutting-edge laser produces a powerful photothermal effect that not only protects the skin from severe photothermal damage, but also reduces it. The majority of PicoSure® devices use a wavelength of 1064nm. 755nm wavelengths offer a highly targeted elimination effect on melanin, promoting pigmentation metabolism and allowing the treatment to work 7 times faster than typical laser treatments. The PicoSure FOCUSTM Lens Array technology not only helps break up melanin with pressure waves within one picosecond, stimulating collagen and elastic fibres regeneration and enhancing elasticity in any ageing cells, but it also helps minimise thermal damage and the possibility of dark patches developing in tattooed areas afterward.

Yes, when the laser makes contact with the skin, there is some pain, although PicoSureTM is less painful than traditional tattoo removal. This is commonly compared to hot bacon grease striking the skin by patients.However, this laser treatment is safe and has few side effects.

How much does PicoSure cost per session?

How Does the PicoSure Laser Work to Remove Tattoos?

PicoSure is an FDA-approved device that employs extremely brief laser pulses (one trillionth of a second in length) to shatter the pigment beneath the skin into minute dust-like particles. The Pico laser operates by delivering ultra-short pulses of energy to problem regions without generating heat. The laser has a strong influence on the skin, breaking any problematic pigment or particles.The laser’s effect is gentle on the skin’s outer layer, despite its highly concentrated energy pulses.